The racist brutality of lynching is a reality within the fabric of American History that affects us all. While the explicit vision of a body hanging from a tree creates a blatant and jarring vision that is a clear and undeniable atrocity, modern-day shootings of unarmed victims by those who have been entrusted to serve and protect is an equal travesty. On February 18th in 1965, Jimmie Lee Jackson, a 26-year old Black man, was shot by a white officer after police attacked a peaceful civil rights protest in Marion, Alabama, He died eight days later. On February 26th in 2012, Trayvon Martin, a 17-year old Black boy was shot dead in Sanford, Florida. Police arrested the shooter, George Zimmerman, only after national outcry against his “stand your ground” claim barred his prosecution. These young men had so much life ahead of them. Their murders were unjust and brutal. These stories repeat themselves over and over again, separated by the initializing specifics, yet connected by the hatred at the core of the action. The truth is that the history of racial injustice in this country must be confronted and recognized before there is any hope of healing.

Bryan Stevenson is working towards healing. He stands at the center of the National Museum for Peace and Justice. It is a museum as well as a memorial. It is activist art and is the first national site dedicated to the legacy of enslaved African Americans. Bryan believes in the hope of recovery and reconciliation. His goal is to advance truth and provide sacred space. 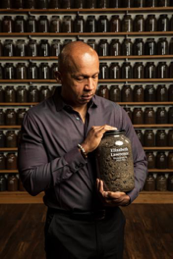 Bryan Stevenson holds one of the jars of soil gathered from lynching sites for display at a museum in Montgomery, Alabama. PHOTOGRAPH BY MATT ODOM