It’s Maryland Primary Election Day! Have you voted? The polls are open until 8:00 pm, so there is still time.

In the early years of this country there were 4 million people in the United States, of which only 120,000 could vote. The right to vote was hard won for women, African Americans, immigrants and others. In 1869, Congress passes the 15th Amendment to the Constitution. That amendment granted all men the right to vote regardless of race, color, or if they were formally slaves. It wasn’t until 1920 that women were given the right to vote and efforts were made to suppress the voting participation by people of color.

Campaigns to erode trust in the electoral process, gerrymandering, voter ID laws, and false claims of widespread fraud are being used to this day to disenfranchise voters, particularly women and people of color. It is essential that we keep fighting these tactics and work to ensure a fair and equitable voting system in this country. However the biggest threat to our democracy comes not from scare tactics or dangerous laws but from our own apathy. We must take participation in the electoral process seriously. Regardless of what you hear, your vote does matter. Speak up, demand to be heard, and honor those who sacrificed before you.

In 2015 following the Supreme Court decision to reverse much of the Voting Rights Act, Phillip Glass responded by restaging his 2005 opera Appomattox with changes that referenced contemporary events and the Black Live Matter movement. It was a remarkably powerful piece and vital to the conversation at the time. Over the years, artists have played important roles in politics and voting rights. For beautiful examples from today, check out Amplifier, the self-described “…art machine for social change.”

Why do artists get involved when rights are threatened? Activist artists know they possess a powerful tool for communication and because these threats typically target those who fought hardest for the vote in the first place. Jen Tolentino, director of policy and civic tech at Rock the Vote says that “across the populations most suppressed by voter ID laws—like people of color and low-income, elderly, students, and LGTBQ people—50 percent are women. In addition, 90 percent of married women—from any group—change their name and are also impacted. So across the board, women have a more difficult time casting a ballot under these laws.” Artist Ashley Lukashevsky teamed up with Amplifier to address just this issue by designing three images that bring the point home. You can read more in a story on the topic in Yes! Magazine. 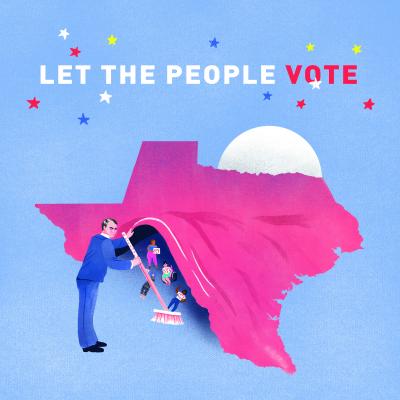 So get out there and vote, make art, learn history, and help lift one another’s voices!