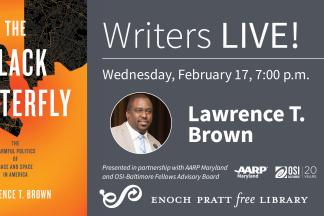 The event is also part of OSI-Baltimore’s Talking About Race Series.

Lawrence T. Brown will be in conversation about his book, The Black Butterfly: The Harmful Politics of Race and Space in America. Presented in partnership with AARP Maryland and OSI-Baltimore Fellows Advisory Board.

The world gasped in April 2015 as Baltimore erupted and Black Lives Matter activists, incensed by Freddie Gray's brutal death in police custody, shut down highways and marched on city streets. In The Black Butterfly—a reference to the fact that Baltimore's majority-Black population spreads out on both sides of the coveted strip of real estate running down the center of the city like a butterfly's wings—Lawrence T. Brown reveals that ongoing historical trauma caused by a combination of policies, practices, systems, and budgets is at the root of uprisings and crises in hypersegregated cities around the country.

Putting Baltimore under a microscope, Brown looks closely at the causes of segregation, many of which exist in current legislation and regulatory policy despite the common belief that overtly racist policies are a thing of the past. Drawing on social science research, policy analysis, and archival materials, Brown reveals the long history of racial segregation's impact on health, from toxic pollution to police brutality. Beginning with an analysis of the current political moment, Brown delves into how Baltimore's history influenced actions in sister cities like St. Louis and Cleveland, as well as its adoption of increasingly oppressive techniques from cities like Chicago.

But there is reason to hope. Throughout the book, Brown offers a clear five-step plan for activists, nonprofits, and public officials to achieve racial equity. Not content to simply describe and decry urban problems, Brown offers up a wide range of innovative solutions to help heal and restore redlined Black neighborhoods, including municipal reparations. Persuasively arguing that because urban apartheid was intentionally erected it can be intentionally dismantled, The Black Butterfly demonstrates that America cannot reflect that Black lives matter until we see how Black neighborhoods matter.

Lawrence T. Brown is a researcher and visiting associate professor with the University of Wisconsin Population Health Institute and a former associate professor at Morgan State University in the School of Community Health and Policy. He is a racial equity consultant and the cofounder of the lead poisoning awareness initiative #BmoreLEADfree. He was a 2012 OSI-Baltimore Community Fellow and a founding member of the Fellows Advisory Board.

Visit https://www.theivybookshop.com/ to order your copy of The Black Butterfly.

The conversation will also be broadcasted on the Enoch Pratt Free Library Facebook page.

WEBINAR: Elaine Ruffolo, Donatello: "Artist of the Florentine Renaissance: Donatello and the Medici (lecture 2 of 2)"

LECTURE: Aneta Georgievska-Shine, "Philip Guston: The Artist as a Young Man – Between Art and Politics (lecture 1 of 3)" 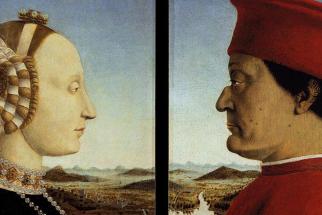 WEBINAR: Elaine Ruffolo, "The Uffizi: Patronage, Architecture, plus Giotto to Botticelli (lecture 1 of 2)"