Want to see your attraction listed here? Send us an email.

"Patterson Park is a true urban park with some 1500 trees, but also ample and visible green space. There is a great mixture of relaxing areas that were designed for strolling in the mid to late 19th century, and active areas with athletic facilities designed at the turn of the 20th century -- including the famous Patterson Park Pagoda, an iconic 3-story tower with balconies designed as a place to see people, surrounding communities and the Baltimore Harbor."

The park sees regular daytime use year-round, as well as evening use before dark during the spring, summer and fall, except for special events, when the park may be active well into the night. Both teams and individuals actively use the athletic fields, pool, fishing lake, ice rink, and tennis courts, which are available for use at no fee. .

The site of Patterson Park played a major role in the War of 1812, serving as the grounds where American troops stood ready during the decisive battle of North Point at "Hampstead Hill," the promontory in the park where the Pagoda is situated.

In 1827, Patterson Park began life as a park with 6 acres of land donated by William Patterson, a wealthy shipping merchant, who hoped to create a "public walk," thus becoming the oldest park in Baltimore and the first gift of land given to a city for the purposes of public recreation.

In 1985, a complete park design by Burton was installed on a property adjacent to MICA's Mount Royal Station and across the street from Meyerhoff Symphony Hall. The artist's design consisted of a semi-circle of benches, light fixtures, walkways, and a landscaping plan. Burton's meticulous attention to detail is visible through the mirrored elements of adjacent buildings incorporated into the layout and design of the park.
The result is an urban park that is both aesthetically tailored to its surroundings and subtly elegant. Funding to design and install the original park was provided by the Pearlstone Family Fund of Baltimore.

One of only a very few similar buildings left in the United States, the Phoenix Shot Tower was used to make lead shot from 1828 to 1892. Molten lead was dropped from a platform at the top of the 234' tower through a sieve and into a vat of cold water. Being constructed of one million bricks, the Shot Tower was the tallest building in the United States until the Washington Monument in Washington, DC, was completed after the Civil War. The Shot Tower was designated a National Historic Landmark in 1972.

The museum seeks to realize its mission by collecting, preserving, interpreting, documenting and exhibiting the rich contributions of African American Marylanders from the state's earliest history to the present and the future.

The Robert Long House and Garden is open daily for tours daily.

Sandy Point is a beautiful 786 acre park on the Chesapeake Bay. Open since the 50's, the park is perfect for swimming, fishing, crabbing, boating and windsurfing. Wildlife viewing and bird watching are very popular among park visitors and Sandy Point's location makes it an ideal location for viewing a large variety of woodland, marsh and migratory waterfowl. Park maps are available at the park office. Main Office: 410-974-2149

School 33 Art Center has long been established as one of the premier exhibit spaces in Maryland. Each year, three gallery spaces play host to many exhibitions of contemporary regional art. Since its founding, School 33 has mounted more than 300 shows featuring the paintings, sculpture, photography, fiber arts, and installations of well over 1,000 talented individuals. Gallery Hours: Wed-Sat 12-6pm

The community of Christians at St. Mark's on the Hill Episcopal Church welcome all persons who seek Christ, no exceptions.

From the outside, our church building has all the historic charm of the 1920's Gothic revival. The stone structures quarried here in Maryland echo the Holy Churches of the English countryside.

On the inside, our church community is a progressive example of the Episcopal Church as a global village. The congregation hails from Africa, the Caribbean, Central America, and all over the United States. We are a pastoral sized community, averaging about 85 people per Sunday. Our community is growing as more people decide to make St. Mark's their church home. At the moment, we are experiencing an increase in the number of families with children. It is a blessing to add age to the diverse demographics of the parish.

We seek to be the kind of church that nurtures your relationship with God and challenges you to grow more deeply in your faith. Gather with us and make the Body of Christ more complete at St. Mark's.

St. Mary’s Spiritual Center & Historic Site is a unique place, both in its history of the Catholic Church in the United States and in its contemporary spiritual ministry.

The Historic Site Visitor Center is CLOSED on Holy Saturday and Easter Sunday.

Established in 1841, St Vincent’s is the oldest Catholic church in continuous use in America’s oldest Archdiocese. As the city’s leading parish in the 1880’s it supported a parochial school and orphanage, a convent and rectory, and a social hall. Today the church continues to play an active role in the community as a leader of the Jonestown Planning Council.

Located in quaint Havre de Grace, Maryland, the restored lock house stands at what was once the Southern terminus of the Susquehanna and Tidewater Canal. Construction began on the canal in 1836 and was completed in 1840. The 45 miles of canal ran from Havre de Grace at the top of the Chesapeake Bay to Wrightsville, PA. It linked with other canals to open central Pennsylvania to convenient trade with Philadelphia and Baltimore. Twenty-nine locks raised mule-drawn canal boats a total of 233 feet. The Lock tender's House was built in 1840 as the canal office at the Havre de Grace entrance to the canal and as a dwelling for the lock tender and his family. In 1982 this house was restored and opened to the public. Several rooms are restored to their original appearance. Historical artifacts of the Havre de Grace area are on display. 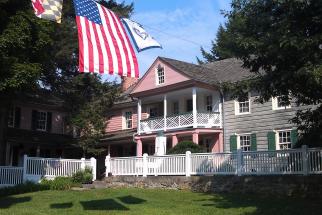 The Union Mills Homestead is a National Historic Landmark located seven miles north of Westminster, Maryland. The site was the homestead of Maryland’s Shriver family for six generations, originally built in 1797 as one of the first early “American Dream” business enterprises. This historic country estate, complete with original furnishings and family possessions, with multiple outbuildings and a working mill, maintains a distinctive character and atmosphere capturing a significant view into an important portion of Maryland history. In 1863, both Union and Confederate Armies encamped here in the days leading up to the Battle of Gettysburg. The Homestead is now a museum of American culture, operated by the Union Mills Homestead Foundation, Inc., a non-profit corporation with all proceeds dedicated to the preservation and interpretation of the Union Mills Homestead Complex.

Wheelchair Access: Partial. Portions of the historic buildings are not accessible, although we do offer a program alternative upon request.

Top of the World is the perfect starting point for any visit to the city and provides a breathtaking view of Baltimore's skyline, harbor and beyond. This city attraction featuring a spectacular 360-degree panoramic view of Baltimore has stationed binoculars and photo-map guides to help guests learn about local attractions, hotels, sites and neighborhoods. In addition, it is a fully handicapped accessible attraction. Located on the 27th floor of the World Trade Center, the world's tallest pentagonal building is home to the only Baltimore attraction to offer an awe-inspiring view of Maryland's urban center. Top of the World has expansive windows that frame the Inner Harbor, the surrounding city and beyond to the Chesapeake Bay. Discover Baltimore's history as guides reveal fascinating facts and personal reminiscences that make Baltimore come alive!

A grand cottage filled with stories of intrigue, exceptional talent, sexual indiscretions, hidden secrets, triumphs and tragedies that changed the national landscape, both for the good and bad.